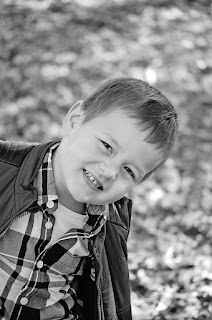 My name is Jennifer Lange.  I am a wife, a nurse, and the mother of 2 children Asher (4 years old) and Lorelei (8 years old).  My husband, Robert, and I are desperately seeking answers for our son's disorder, a neurodegenerative vacuolar storage disorder that has only been identified in dogs with changes to Atg4d as the identified cause.  http://journals.plos.org/plosgenetics/article?id=10.1371/journal.pgen.1005169


Asher was born at 41 weeks gestation weighing 7 lbs 11oz. He sat up,  crawled, climbed,  walked and talked within appropriate times. He was strong but always a little clumsy. At his 2 year well check up,  the pediatrician noted he was a little floppy for his development.  She suggested getting him in the pool and try and strengthen up his core muscles. So we put him in swimming lessons,  let him "swim" in our big tub and things looked good.


Then late August 2014, Asher was 3 years old and 2 months, we were out for a walk and stopped at a park.  He got out of the stroller and was very euphoric and extremely uncoordinated.  It lasted for a few minutes and then passed however the ataxia was still present. He was no longer able to walk up the stairs in a reciprocal manner, no longer able to pedal his tricycle, was having "staring" spells and was falling several times a day.


We took him to see a neurologist who ordered an EEG, a battery of blood work,  and an mri. His was relatively normal with only short epochs of posterior delta slowing while awake. Initial blood work was fine however his mri showed moderate cerebellar atrophy. The neurologist ordered more blood work and an EMG. Blood work was normal except his carnatine level was mildly low. EMG was also normal.  And we were referred to a biochemical geneticist for further testing,  as he was thinking this may be a mitochondrial disorder.
In the meantime,  Asher was started on keppra as he was suffering absence seizures and lost consciousness on two occasions. He also started physical therapy (PT) and occupational therapy (OT) to help with some of his strength and coordination.


In November 2014, we saw the geneticist.  They wanted to do whole exome sequencing, not just mitochondrial testing. They explained this was the latest and most exhaustive genetic testing available at this time. Of course we had to wait for the insurance company to sign off and then wait for another appointment in order to draw the blood.  Dec 17 2014, all the of us had our blood drawn and now all there was to do was wait and wait.


At this point, we had fallen into a routine.  Therapy 1-2 times a week, watch for seizures,  increase Keppra,  work,  more blood tests,  an absolutely useless second opinion from neurology, and watch the severity of his symptoms wax and wane.
Finally at the end of June our tests results were back however the clinic told us they needed to do more research and they wanted us to make an appointment to come in and get the results.  An "urgent" appointment was made for 3 weeks out.


At the appointment they informed us his test results were negative for both definitive mutations and variants in genes possibly associated with reported phenotype. However, his results for candidate genes revealed 2 variants of unknown clinical significance on ATG4D, c.266G>A(p.S89N) was paternally inherited and c.839a>G(p.Y280C) was maternally inherited.   This mutation was only recently identified in a particular breed of dogs as the cause of a neurodegenerative vacuolar storage disease, in which my son exhibits the almost exact same symptoms, and they are 97% positive this is cause of his disorder.  The genetics consoler further explained the mutations on ATG4D that my husband and myself possess, are known but are very rare.  She even stated, "The chances of either of you having children with someone else who has a mutation on this gene are so low, you have a better chance of winning the lottery. We have gone from what we thought was a rare disorder to an extremely rare disorder. Asher is human number 1."


The geneticist then gave us a layman's term description of what is occurring in Asher's body.  He compared the body to a house needing all different working parts to make it work.  Autophagy genes are needed to pick up the trash from around your house to trash can. In Asher's case, his vacuum is broken and they don't know how to fix it.  So his cells are building up with toxins and outdated material without an effective way to clean up and are not able to maintain neuronal homeostasis, which makes this a progressive disease. We then agreed to publish these results in hopes of getting more answers.


Currently Asher's symptoms wax and wane in severity.  His hand grip is further weakened, he has become more lethargic, and has somewhat of an activity intolerance along with all of his other symptoms. We continue on with PT, OT, and various doctor appointments and specialties.  He attends pre school and we continue to try balance raising an otherwise typical 4 year old boy and his difficulties.
We are searching for answers, any information or any "share" of this blog is much appreciated.  All it takes is for the right person to read this.

Popular posts from this blog

Still the only one? 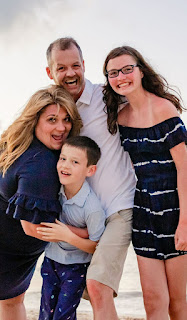 In light of today being Rare Disease Day, I thought it fitting to do a MUCH needed update to this blog and a promise to keep it going. taken 3-2020 while on vacation   So many times have I sat down to write, so many nudges from God, and each time I was unable to do so. Maybe it was my way of living in a little bit of denial, making excuses of being too busy or what not.  To write this is to admit each and every time that I look at it or respond that this real and feel all of the emotions that go along with it. I could also blame my job and Covid 19 for the delay, as I am an Critical Care Nurse and we'll just say its been a difficult year. Whatever it may be, here we are today again wishing none of this was real but facing it and moving forward. So first off, for those of you who don't actually know me, my son Asher has a very rare neurodegenerative disease. In fact, he is the first person EVER to be identified.  It is a recessive disorder involving gene ATG4D. Both of our singl
Read more

- January 21, 2016
We have a researcher! A researcher was found from the UK who has been studying ATG4D in a functionality sense. We have been in contact via email and I am currently working on getting him in touch with Asher's doctors.  We also have a couple of more leads to look into as well however Asher still remains the one and only at this time. Asher also had made great strides himself this week.  He was fitted for SMOs  (a type of brace/orthotic) and he took them home almost 2 weeks ago.  He loves them! They have batman on them,  which he chose of course,  and was able to do things in PT today that he hasn't been able to do.  A  simple 2 footed jump is nothing to most of you but it was a big step for this guy!  He has also has been able to run and walk more easily with less falls. This entire week we have felt incredibly blessed from the outreach and support of everyone. This little blog has been viewed over 9,000 times and had reached more than 10 differnt countries.  A simple share fr
Read more

jllange79
Just a mom, searching for answers for her son